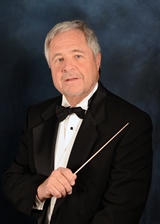 Joe Frank Jr. is a retired music educator and band director with over 35 years of experience working with student and adult musicians in Texas and Georgia. He was born in Harlingen in the Rio Grande Valley and spent most of his adult years in Richardson and Sherman, Texas. Joe taught for 17 years in the Richardson ISD where mentors, such as Joe Frank, Sr., Richard Floyd, Tommy Guilbert, Robert Floyd, and Howard Dunn helped form his concepts of teaching students; and interpreting, rehearsing and performing wind band literature. In 1990, Joe became Director of Bands for the Sherman ISD and helped lead the Sherman Bands to 14 years of successful performances, competitions and statewide recognition. While living in Athens, Georgia, Joe became director of the Classic City Band and developed a love for working and making music with adults. Joe is a third-generation band director. His father, Joe Frank, Sr., was a well-known Texas band and orchestra director, and charter member of the Phi Beta Mu Band Director Hall of Fame.

Joe currently lives in Denison, Texas, with his wife Becky. He is a frequent clinician/consultant and adjudicator for middle school and high school bands. His daughter Jessica currently plays clarinet in the Plano Community Band and his son Jeff is a pediatric neurologist in Oregon. Joe enjoys sailing, golf, snow-skiing and traveling with Becky. 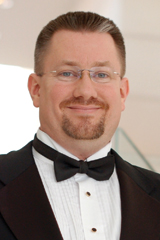 Jim Carter was born in Texas City, Texas, and has made Plano home since 1969, going though the Plano schools and its band program at Plano Senior High under the direction of Charles Forque. During his high school days, Jim was privileged to have played with Doc Severinsen and Allen Vizzutti, but his first love always seemed to be jazz. After graduation, he was selected to play with the National Bandmasters Association Jazz Band, performing with Marvin Stamm at the University of Tennessee in Knoxville. Jim attended Sam Houston University on a music scholarship, receiving his degree in Music Education in 1991. While at Sam Houston, Jim studied under Dr. Fisher Tull, Dr. Gary Sousa and Dr. Rod Cannon, headed up the recording and archiving of concert performances and was a member of Kappa Kappa Psi. After teaching a couple of years, Jim returned to Plano and began working in the communications field. He currently holds the position of Director of A/V and Computer Services for the 4,500 member Custer Road United Methodist Church. To keep music in his life, Jim joined the Plano Community Band in 1993 as the baritone saxophone player. Jim also plays with many Dallas area jazz and big bands. He became the band’s associate conductor in 1995. Jim resides in Plano, Texas. 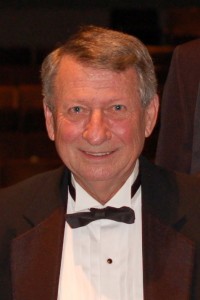 Tommy was born and raised in Jackson and Vicksburg, Mississippi. He received Bachelor and Masters of Music degrees from Northeast Louisiana University. Tommy taught band in Mississippi and Louisiana prior to coming to J. J. Pearce High School, Richardson, TX in 1970. His bands were consistent sweepstakes bands, many of which received state and national honors for outstanding performances.

Upon leaving teaching to become a school financial consultant, Tommy continued to be active as a clinician and conductor. He joined the Plano Community Band as Conductor and Artistic Director in 2001.

Believing passionately in “Music for Life”, one of his proudest accomplishments is the large number of former students who continue to play today, whether as professional musicians, music educators or talented amateurs.