The Plano Community Band is a volunteer organization made up of approximately 70 musicians from all walks of life who share a passion for music. The band performs two Spring concerts and a Fall concert each year at the beautiful Eisemann Center in Richardson, but is best known for its Summer concerts at Haggard Park, abutting old downtown Plano. The Summer Series begins the first Monday in June, and performances at the park continue every other Monday evening for a total of five concerts. The band has themes for each concert including kids’ night, big band and a patriotic concert. 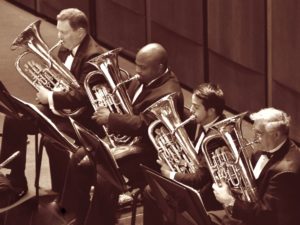 The band is a nonprofit organization sponsored in part by the Plano Cultural Affairs Commission. The band is also supported by John Paul II High School, member dues and from generous donors in the community. There is never an admission charged for any of the band’s public performances.

The Plano Community Band is a proud member of the Association of Concert Bands, an international organization dedicated to the advancement of adult community bands. The band has performed at several of their national conventions as well as hosted the conventions in 1992 and 2010.